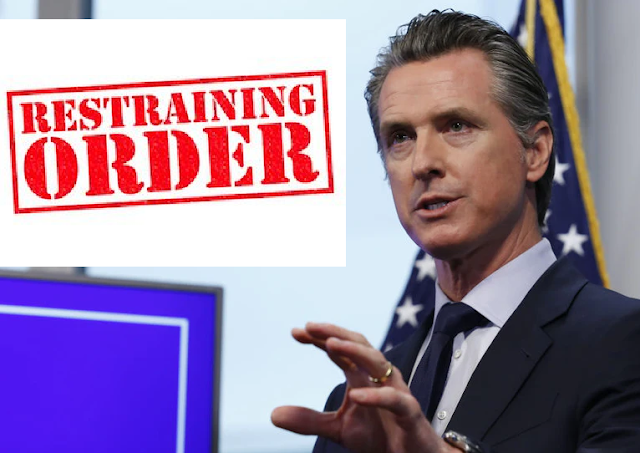 In a statement on Thursday, Orange County Sheriff Don Barnes said his intention “is to not take enforcement action on this order.”

According to the City Attorney, there is no foreseeable end date for the closures.

Hours after Gov. Gavin Newsom ordered all Orange County beaches to close, the Huntington Beach City Council voted Thursday evening to challenge the State order.
After meeting in closed session to discuss the measure, the council voted 5-2 to “take any legal action to challenge the governor’s executive order,” City Attorney Michael Gates said. The two dissenting votes came from council members Barbara Delgleize and Kim Carr.
Huntington Beach Mayor Lyn Semeta said the city hopes to get an injunction soon, but it will close its beaches in the meantime.

“We’re very concerned about if we happen to be the only Orange County beach open at that point,” she said. “That would be very difficult on our marine safety officers.”
Huntington Beach leaders aren’t the only ones in Orange County at odds with the governor’s decision.
The Newport Beach City Council — which voted Tuesday to keep its beaches open — plans to meet this weekend to discuss a similar challenge to the directive.
Newsom’s order also met sharp criticism from county supervisors, with one calling the move an “abuse of power.”
The comments came during a news briefing on the county’s response to the COVID-19 pandemic, which was held just hours after Newsom announced the temporary closure of all local and states beaches in O.C.
Earlier in the week, the governor had criticized beachgoers who crowded O.C. shores amid a heatwave over the weekend, defying the state’s stay-at-home order meant to curb spread of the novel coronavirus.
O.C. Supervisor Michelle Steel called the governor’s actions “arbitrary” and said it was an act of retribution against the county.
“We should be rewarding our communities for practicing safe social distancing, not punishing them by closing down only Orange County beaches and this is not acceptable,” she said. “I will be looking into the right response to the governor’s overreaction and abuse of power.”
Semeta shared a similar sentiment, saying she was shocked Newsom issued the directive without warning — especially because she felt the city “did a really good job, in terms of all the measures we put in place to try to make social distancing happen.”
Steel praised local police departments for ensuring that social distancing was being followed at the beaches.
“The major point of contention that has lead to this situation are a few misleading pictures… taken at the particular angle which made it look as if beachgoers were crowding,” Steel said.
Supervisor Don Wagner echoed Steel’s statement, saying that the “telephoto lens distorted what was going on on the beach.”
“It is clear to us that the governor… is basing the decision to single out Orange County on a couple of press photos,” Supervisor Don Wagner said.
After a media question that mentioned there were also videos of the crowded beaches, Wagner rolled back, saying, “We are not saying there is 100% compliance…” The few violations don’t mean that all beaches have to be shut down, he added.
When asked whether the county would try to sue Newsom or the state, Wagner said, “I don’t foresee legal action but ultimately we are going to be guided by counsel … We want to work with the governor.”
O.C. Sheriff Don Barnes said while he hasn’t seen the actual order, he doesn’t plan to take enforcement action.
“My intent … is to seek voluntary compliance,” Barnes said. “I have no desire to enforce … through arrest.”
The governor’s office issued a letter to the O.C. Board of Supervisors hours later, saying the closures would go into effect Friday.
“Our State Department of Parks and Recreation is shifting to full closure of all Orange County State Beaches on a temporary basis,” the letter states. “Additionally, beaches operated by local governments in Orange County are directed to institute full closure.”

5 days later Gavin Newsom says we "Based on data, its' safe to begin opening California again." 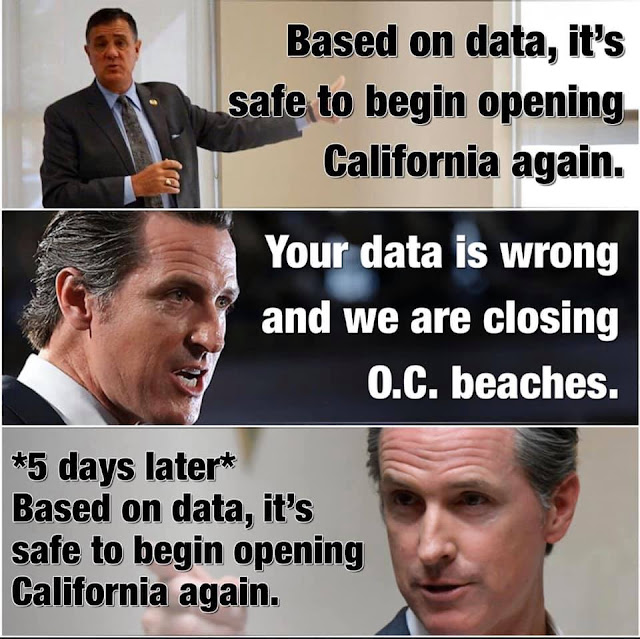