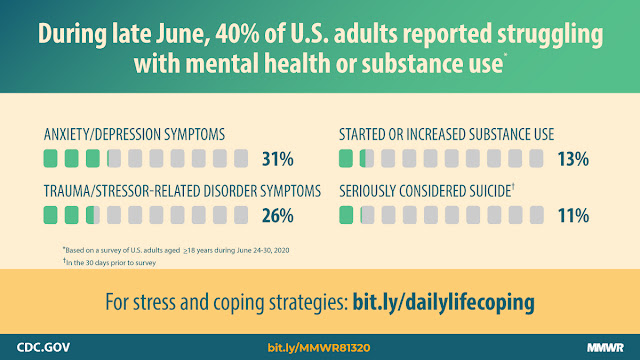 The coronavirus disease (COVID-19) pandemic has been linked to mental health issues related to disease-induced morbidity and mortality and prevention practices, including the effect of physical distance and stay-at-home orders. Symptoms of anxiety disorder and depressive disorder increased dramatically in the United States. 40.9 percent of respondents reported at least one adverse mental or behavioral health condition, including symptoms of anxiety disorder or depressive disorder (30.9 percent), symptoms of a pandemic-related trauma and stressor-related disorder (TSRD) (26.3 percent), and have begun or increased opioid and alchohol use to deal with COVID-19-related stress or emotions (13.33 percent).  Read more about the mental health report here.

"We've had anecdotal information about people buying and consuming more alcohol, but this is some of the first survey-based information that shows how much alcohol consumption has increased during the pandemic," Michael Pollard, lead author of the study and a sociologist at RAND, a nonprofit research organization, said in a statement. Pollard and his colleagues reported their findings Sept. 29 in the journal JAMA Network Open.

The data came from a nationally representative sample of 1,540 Americans who were queried about their drinking habits between May and June in the long-running RAND American Life Sample. The answers were then compared to survey data obtained at the same time last year from the same individuals.

"In addition to a range of negative physical health associations, excessive alcohol use may lead to or worsen existing mental health problems, such as anxiety or depression, which may themselves be increasing during COVID-19," the authors noted.