Did The News Stage Fake Patients” In Coronavirus Testing Line?

TV network CBS News has been accused by right-wing activist group Project Veritas of using a staged shot to exaggerate how bad the coronavirus pandemic has hit Michigan. Footage of a long line of cars, apparently waiting to get coronavirus tests at Cherry Medical Center in Grand Rapids, was used in a CBS This Morning series on testing in Michigan, which accused the state’s health system of “fail[ing] some of its people.” However, Project Veritas said the CBS News crew got hospital staff to line up in their cars so it looked busier. The claim is based on an interview with an anonymous hospital “insider” who approached Project Veritas with information on the CBS shoot, and other hospital staff who are named in the clip but appear to have been filmed covertly by the “insider” discussing the staged shot.

In a statement to Project Veritas, CBS News accused Cherry Health of adding staff to the queue without their knowledge, and said the Cherry Health portion of the report would be removed. CBS This Morning admitted last month that they mistakenly used footage of an overflowing Italian hospital ward in a report on New York hospitals.

Here is the fake staging line below. 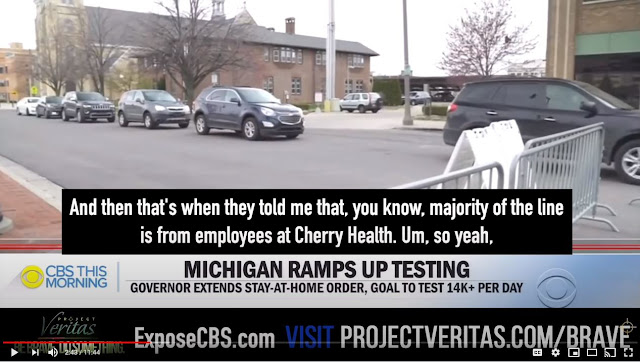