Does Trump Now Regret Getting The Flu Shot? 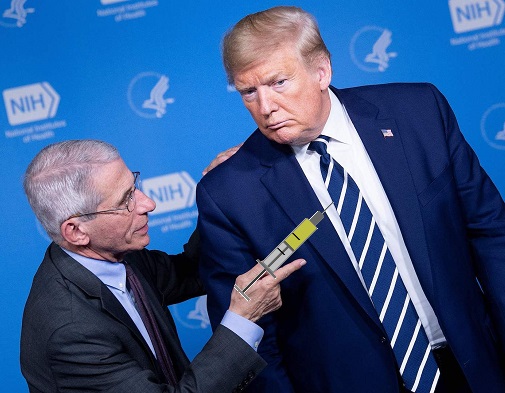 Trump was skeptical of his flu shot and felt obligated to get one earlier this year.  Dr. Fauci of the CDC has been promoting the safety and benefits of the flu shot despite a 10-40% annual effectiveness rate.  Big pharma is the largest TV advertiser and is doing a great job of spreading fear and conditioning the American public that they must medicate everything.

President Donald Trump cast doubt on the effectiveness of influenza vaccinations, claiming that since he was needed to be president, he never had the seasonal flu and just got a flu shot. "I'm not sure if I should have. Oh, who knows?

During an interview with the Washington Examiner on May 14, Trump's comment on flu shots came up.

“All my life I see — I was lucky; I never had the flu,” Trump said during a Fox News virtual town hall on May 3. “Then I came here; they want to give a flu shot. And I said, ‘I don’t want a flu shot,’ but they have to give it.”

Back in 2015 before President Donald Trump had announced his intentions to run for the highest elected office in the country, he announced an intention of a different sort.

On Sirius XM’s “Opie and Anthony” show, he stated that he would not be getting a flu vaccination that year, using some fairly strong verbiage in the process.

Here is, in part, what Trump said in response to a query about whether or not he would be getting a flu shot himself in 2015:

“I’ve never had one… I don’t like the idea of injecting bad stuff into [my] body. I have friends that religiously get the flu shot and then they get the flu… I’ve seen a lot of reports that the last flu shot is virtually totally ineffective.” He went on to add, “I’ve passed on it, but that doesn’t mean [other] people should.”

At the time, Donald Trump’s opinion on flu vaccinations was seen as nothing more than the opinion of a celebrity. Now that he is President of the United States, however, his opinion carries more weight and it is this fact that has raised concerns across the country.

Thanks in large part to conflicting information—online and elsewhere—on the flu vaccine, each year there is a fairly significant portion of the population that chooses not to receive the influenza vaccine, even though the Centers for Disease Control and Prevention (CDC) recommends that almost all individuals over the age of 6 months receive the shot each year.