How Stupid Are Americans & News Media on Negative Interest Rates? 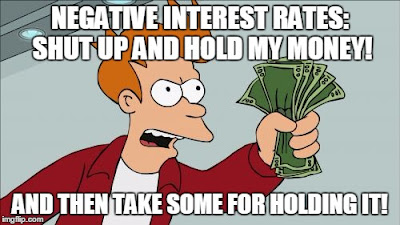 I don't think the average American has a clue what is about to happen in our banking system.  Banks could soon start stealing your hard-earned savings deposited on the premise that negative rates are to stimulate the economy.  The news media will just cover the unprecedented bank thievery as the "right thing to do" for our economy.  Just more bank fraud if you ask me!

Here is a Google Trends search for "negative interest rates" and you can see that the average American is completely clueless what is going on in the central banking system.  Google Trends is an insightful way to see what people are searching for when new events and things happen in society.  There

Here are some topics that are being searched on negative interest rates below. 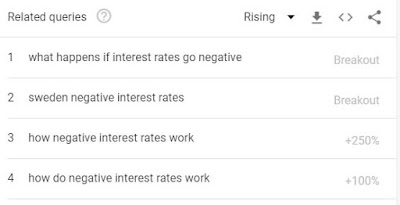 Most people who have saved money their entire lives have no clue that the banking system is about to start taking it from them slowly but surely.  Yes that is correct, the banking system is about to penalize you for being a responsible saver.  Here is an overview of what has been happening with negative interest rates around the globe and why you should be concerned.

Negative interest rates seem like a counterintuitive, if not downright crazy for banks or the Federal Reserve.  Why would a money lender or bank be willing to pay someone to borrow money, considering the lender is the one taking the risk of the loan default?  Why would anyone deposit savings in a bank that would take more of your money the longer you had it in the bank?

Central banks have been lowering interest rates for decades to 0% trying to stimulate economies.  They have run out of policy options to stimulate and are turning to desperate measures of negative rates to steal your money now.  With negative interest rates, cash deposited at a bank yields a storage charge, rather than the opportunity to earn interest income.  The idea is to incentivize loading and spending, rather than saving and hoarding.

In recent years, several European and Asian central banks have imposed negative interest rates on commercial banks.  How has that works out?  Complete failure.  With negative rates, cash deposited at banks yields a storage charge, rather than the opportunity to earn interest income.  By charging European banks to store their reserves at the central bank, the policyholders hope to encourage banks to lends more.

Negative interest rates are not only an unconventional monetary policy too, but they are also a recent one.  Sweden's central bank was the first to deploy these rates: In July 209, the Riksbank cut its overnight deposit rate to -.25% and the European Center Bank (ECB) followed suit in June 2014 when it lowered its deposit rate to -.1%.  Other European countries and Japan have since opted to offer negative interest rates, resulting in $9.5 trillion worth of government debt carrying negative yields in 2017,

How much Government debt has been issued at negative interest rates?

About $15 trillion of government bonds worldwide, or 25% of the market, now trade at negative yields, according to Deutsche Bank.  This number has nearly tripled since October of 2018.  CNBC article from August 7, 2019.

On Thursday, May 7, 2020 an unprecedented event took place after a violent repricing in the Eurodollar contracts as near as November 2020, for the first time ever the market was pricing in that negative interest rates are not only coming to the USA, but would arrive sometime around the Presidential election.

The Bank of England or United Kingdom just sold its first negative-yielding Government bond on May 20, 2020.  In an auction Wednesday, the U.K. Debt Management Office said it sold £3.8 billion ($4.66 billion) worth of three-year gilts at a yield of -0.003%. This negative-yielding bond means the British government is effectively being paid to borrow. Investors will get back slightly less than they initially paid if they hold the bond to maturity, such is the demand for shoring up money in bonds.

I have not doubt in my mind the US Central Bank will also issue negative interest rates on or around the November election.  The US Central Bank will use the Coronavirus shutdown crisis as an excuse for why they are doing this to justify taking your savings to the American public.  The government won't let this crisis go to waste to continue its debt Ponzi scheme fraud.

Why would you pay the Government to hold your money? What does this mean for savers?