PhD Scientist "A Vaccine Could Be Causing The Covid-19 Pandemic"

Judy Mikovits's contrarian view theory is a radically opposing view of current CDC recommendations.  These are not recommendations but simply an opportunity to hear someone who doesn't agree.

LET'S BE CLEAR - Judy does not disagree with all vaccines. However, this virus appears to be derived from a vaccine according to her.

Her credibility is also into question with this story.  Was a Scientist Jailed After Discovering a Deadly Virus Delivered Through Vaccines?  This Snopes article claims Judy Mikovits did not discover a deadly virus delivered through vaccines; she was arrested for allegedly stealing equipment belonging to the Institute that fired her.  This Snopes article could be a fake as Judy does claim in the video that she might have been framed.  Hard to know who to believe.

There are several articles also debunking her claims but they all seem to focus on her credibility and don't really address why her theory could be wrong?

Judy Mikovits, Ph.D., spent twenty years at the National Cancer Institute, working with Dr. Frank Ruscetti, one of the founding fathers of human retrovirology, and has co-authored more than forty scientific papers.

YouTube Keeps Removing The Video so Click on Site to Watch
Judy's 2nd Interview
Mikki Willis Producer of Plandemic Video Above
"Anthony Fauci, Bill Gates, and Big Pharma don't want you to read this book. Get PLAGUE OF CORRUPTION now and learn the truth about public health industrial complex's decades of research fraud and vaccine cover-ups."

Dr. Judy Mikovits is a modern-day Rosalind Franklin, a brilliant researcher shaking up the old boys' club of science with her groundbreaking discoveries. And like many women who have trespassed into the world of men, she uncovered decades-old secrets that many would prefer to stay buried.

From her doctoral thesis, which changed the treatment of HIV-AIDS, saving the lives of millions, including basketball great Magic Johnson, to her spectacular discovery of a new family of human retroviruses, and her latest research which points to a new golden age of health, Dr. Mikovits has always been on the leading edge of science.

With the brilliant wit one might expect if Erin Brockovich had a doctorate in molecular biology, Dr. Mikovits has seen the best and worst of science. When she was part of the research community that turned HIV-AIDS from a fatal disease into a manageable one, she saw science at its best. But when her investigations questioned whether the use of animal tissue in medical research was unleashing devastating plagues of chronic diseases, such as autism and chronic fatigue syndrome, she saw science at its worst. If her suspicions are correct, we are looking at a complete realignment of scientific practices, including how we study and treat human disease.

Recounting her nearly four decades in science, including her collaboration of more than thirty-five years with Dr. Frank Ruscetti, one of the founders of the field of human retrovirology, this is a behind the scenes look at the issues and egos which will determine the future health of humanity.

Robert F. Kennedy Jr. concludes his foreword to the Plague of Corruption with, "This account by Judy Mikovits and Kent Heckenlively is vitally important both to the health of our children and the vitality of our democracy. My father believed moral courage to be the rarest species of bravery. Rarer even than the physical courage of soldiers in battle or great intelligence. He thought it the one vital quality required to salvage the world. If we are to continue to enjoy democracy and protect our children from the forces that seek to commoditize humanity, then we need courageous scientists like Judy Mikovits who are willing to speak truth to power, even at terrible personal cost."

(Updated on May 7) Since watching this video I have asked two friends who have had the Covid-19 virus if they had a flu shot.  Both said yes.  2 people getting flu shots and 2 Covid-19 cases do not prove a theory but it begs for more people being asked the same question.

Are nursing homes forcing residents to get flu shots?  Dr. Judy Mikovits did say that if you had the flu shot you’re 36% more likely to get Covid-19.

Please comment below if you have had the flu shot recently and tested positive for the virus.

Can We Really Develop a Safe, Effective Coronavirus Vaccine?
Why We Need a Placebo Covid-19 Vaccine
DOJ’s Antitrust Case vs Google is Biggest in 20 Years 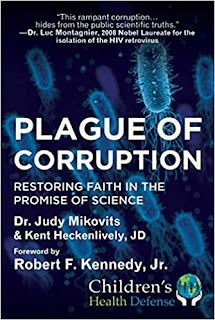