How Much $ Does Your State Unemployment Trust Fund Have Left? 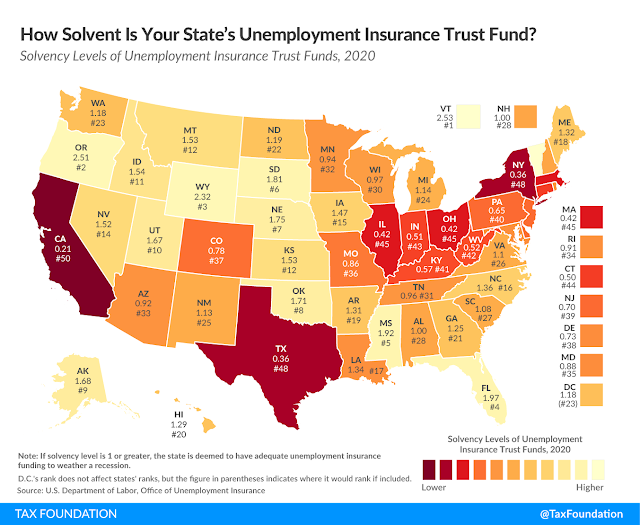 Many states entered the crisis with drastically inadequate unemployment compensation trust funds. Trust funds in California, Massachusetts, New York, Ohio, and West Virginia are nearly or completely gone, with depletion imminent in Connecticut, Texas, Illinois, and Kentucky as well. According to these projections, a dozen states only have enough left in their funds to pay out a month’s worth of benefits based on those who have filed for or are receiving benefits to date; since payments lag claims, it may take an additional week or two for funds to be fully exhausted.

According to the Treasury Department, nine states—California, Connecticut, Hawaii, Illinois, Massachusetts, New York, Ohio, Texas, and West Virginia—have already been approved for federal loans (called Title XII Advances) in anticipation of the exhaustion of their trust funds. States must repay these advances (with interest starting in 2021), and if they still have outstanding balances after two years, in-state businesses will face higher federal unemployment insurance taxes to compensate for the state being in arrears.

Mandatory business closures and shelter-in-place orders have radically accelerated job losses compared to the steadier pace of layoffs in prior recessions, meaning these claims likely represent a far greater share of the ultimate total than did any week’s claims during the Great Recession. But the numbers are still staggering, with every likelihood of sobering numbers in coming weeks as well.

This interactive tool below allows you to see how the most recent week’s initial unemployment compensation claims in each state compare to average and peak weekly claims during the Great Recession. Most states are woefully unprepared for the magnitude of the challenge ahead. Entering the crisis, 21 states’ unemployment compensation trust funds were below the minimum recommended solvency level to weather a recession. Six states had less than half the minimum recommended amount, representing 37 percent of the U.S. population.


Read Here for How Does Unemployment Insurance Work

Going forward it will be necessary to ensure that (1) those who lose their jobs have access to extended unemployment benefits that allow them to remain home throughout the crisis if they cannot be employed in a sector that is consistent with telework or appropriate social distancing, and (2) the taxes that fund unemployment insurance don’t overly burden businesses struggling to survive. It’s hard to accomplish both aims. To do it, the states will almost certainly require federal assistance. Higher taxes are coming whether you like it or not.

What is the news saying?

There are lots of news articles telling claimants and not to worry.   Here is another article from CNN saying that unemployment benefits will still be paid even if state funds run out.

How are States combating the likely massive unemployment fraud?
at Monday, May 11, 2020