The same man who founded Microsoft and couldn't protect his own PC software company from viruses is trying to vaccinate the World?  Gates made billions of dollars from a planned obsolescence scheme for his Windows 95, Windows 98, Windows 2000, XP, Vista software.

Microsoft generates their revenues from PC sales to the average user once-every-three-years. Corporations and businesses spend millions of dollars to protect and upgrade their Windows environments annually. Protection against viruses is often the primary motivation to upgrade.

Microsoft PC software founded on April 4, 1975 still cannot protect you from a virus almost 45 years later.  Could never plug the holes in its' software that infects millions of computers with viruses each year.  These viruses take over your computer and require you to purchase the upgrade for the next version of software in order to get rid of all the viruses on your computers.  Billions of dollars were lost as a result of decade long computer pandemic.

Huge anti-virus computer software companies like Symantec and McAfee were started to stop the spread of Windows PC viruses.  Companies and tech support people made and lost billions of dollars from faulty PC software that couldn't prevent viruses from infiltrating computers.  This was a huge scam based on faulty software.

Meanwhile this opened the door for companies like Apple which had a much better method of protecting computers from viruses.  How many viruses have you ever had on your iPad, iPhone or Mac?

I grew up in the Midwest where trust is a huge principal of society.  Bill Gates has not earned my trust based on the way he has built his business over the last 50 years.  I also wrote this post because I can't stand hypocrisy.

I am not anti vaccination for the most part.  However, right now I am skeptical on vaccines and think there needs to be a lot more input from many more sources on this issue. 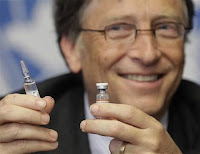